My Friend Dahmer by Derf Backderf 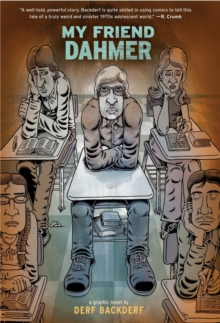 My Friend Dahmer is a graphic novel, or perhaps more of a graphic memoir, written and drawn by a high school classmate of the notorious serial killer Jeffrey Dahmer. It outlines the brief period during the 1970s during which Derf Backderf and his friends Mike, Neil and Kent formed a friendship of sorts with Dahmer - albeit one founded almost entirely on their amusement at, and fascination with, his odd behaviour.

If you were imagining this might be a dark, gothic affair full of sinister drawings, you couldn't be more wrong. Backderf's excellent monochrome artwork is actually more akin to that which you'd see in a well-produced children's comic or a broadsheet cartoon strip. This contributes to the complete lack of sensationalism or prurience in Backderf's account of the teenage Dahmer, whom he presents not as a terrifying villain-in-training but as exactly what he was at the time: a lonely, awkward teenager who got his classmates' attention by spontaneously mimicking the speech and movements of someone with cerebral palsy, and feigning seizures for comic effect. That's not to say that the artwork isn't ever chilling - the wordless opening frames showing Dahmer as a child as he walks along a lonely woodland road by himself and discovers a dead cat are tense and ominous - but this is certainly no horror comic.

This is much as a book about the 1970s, about school and about being a teenager in smalltown America as it is about Jeffrey Dahmer. As Backderf freely admits, while he and his friends admitted Dahmer into their circle - referring to themselves at one time as the 'Dahmer Fan Club' in appreciation of his strange behaviour - none of them could truly be said to have really liked him or formed a great depth of feeling towards him. He entertains them, providing them with material for endless pranks (like the time they endeavoured to place him one or another into every school yearbook picture, whether he was a member of the group or not, or spent hours watching him perform his 'spaz'* act to the baffled discomfiture of store owners and shoppers at the local mall) but do they actually like him? Not much, it appears - they didn't invite to him to many, if any, social events outside school, and only afterwards does it occur to Backderf how acutely lonely Dahmer must have been, as his parents raged at one another in their isolated forest house. Once they leave high school, they have no further contact with him at all - in fact, Derf met with his friends a few years later and someone mentioned Dahmer's name, Derf joked, quite genuinely, that he was 'probably a serial killer'. Many of us, particularly boys, will know the feeling of having a 'friend' that you're not really sure you even like that much, but who you allow to be part of your circle purely because they somehow make you feel that you're no longer the weirdo - as Derf says, Dahmer was almost 'a bizarro school mascot'.

There are, of course, many shocking things about Jeffrey Dahmer's story, even when you end the narrative, as Backderf more or less does, when Dahmer is still in his late teens, but while this book does touch on some incidents that Backderf knew nothing about at the time of their acquaintance, it wisely focuses on the things that Backderf personally observed which are, in themselves, startling. Dahmer, for instance, developed a serious drink problem as a teenager that was clearly apparent to his classmates - he was very obviously drunk and reeking of alcohol at school on a daily basis - yet his teachers fail to notice. There is also an incident where, while on a school trip to Washington DC, managed to secure for himself and his friends, with a single call from a phone box, a private guided tour of the office of the then Vice-President, Walter Mondale, who greeted the boys personally.

How did Dahmer, a lonely, bullied misfit for much of his childhood who was so uncomfortable at his high school prom that he literally ran away from his date and spent the evening at McDonald's, manage to affect a manner sufficiently confident and charming to pull this off? It was, Backderf says, 'an incredible talent for BS' - was it this talent that later enabled him to dupe men and boys he had just met on the street into going back to his house to pose for nude photos, where he would then drug, molest and kill them? Or, still in his late teens, to make two police officers believe that the reeking bin-bags in the boot of his car, containing rotten human body parts, were simply rubbish that he'd forgotten to put out for collection while his parents were away and that he was taking to the local tip - in the early hours of the morning?

I can't think of another book quite like this one, and I would recommend it if you like the graphic novel format but have zero interest in superheroes, sci-fi or fantasy. Despite its focus on a boy who was soon to become a cannibalistic, necrophiliac serial killer, it has an oddly strong sense of nostalgia about it, and the questions Backderf asks himself as he relates his experiences of Dahmer are thoughtful and relevant.


*Backderf's word, not mine - Backderf does point out in the book that he and his friends are now deeply ashamed of the entertainment they got from mimicking disabled people, and remember that these were teenage boys in the 1970s, when attitudes were very different.)
Email Post
Labels: america book review derf backderf graphic novel high school jeffrey dahmer memoir murder my friend dahmer serial killer