Only Ever Yours by Louise O'Neill

Straight after finishing one dystopian novel I moved on to another, Louise O’Neill’s Only Ever Yours. Aimed at a young adult audience (although judging from the content I would assume the older end of that market) it’s a nightmarish futuristic satire on society’s obsession with women’s looks and roles – think a sinister hybrid of The Hunger Games, The Handmaid’s Tale and Mean Girls with a touch of The Stepford Wives. 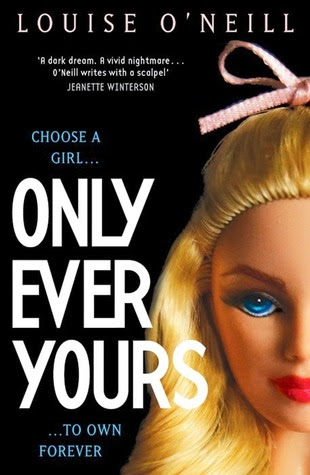 16-year-old narrator Freida and her friends have spent most of their lives in a repressive boarding school, where they’re taught every day not to show undue emotion (denounced as female hysteria), not to challenge men and, above all, to be beautiful. Hours are spent selecting outfits, applying makeup and working out in the gym. Meals are chosen from buffets full of low-carb, zero calorie options – with the tastier foods only appearing at the taboo ‘Fatgirl’ table. Outside lessons the ‘eves’, as they are known, are isolated from one other physically but allowed to communicate through censored internet access and social networking apps. Perhaps worst of all, they are groomed to compete – to judge themselves against one another, to critique each other’s looks, and achieve official rankings according to their appearance.

Only the highest-ranked eves will be chosen as ‘companions’ for elite young men and to bear them sons. The rest will become ‘concubines’ in state-owned brothels, or ‘chastities’ – shaven-headed celibates who will guide future eves through their education, reminding them constantly of their inherent inferiority to men in a society so patriarchal that its leader really is known as The Father. I've given the girls' names upper case letters here, purely for ease of reading, but in the book women aren't even given that privilege - only the men are considered worthy of capital letters. Often, the eves aren't named at all - merely numbered.

Some of the details - Zones instead of countries, an oppressive Big Brother style dictator, weird genetically engineered foods, and so on –  did sometimes give the world of Only Ever Yours something of a dystopia-by-numbers feel. Much of the plot, in which Freida finds herself betraying her former best friend Isabel in order to forge a dangerous alliance with queen bitch Megan, is also relatively formulaic and a long-standing teen fiction set-up. Moreover, I felt we didn't really see enough of Freida and Isabel as friends to get much sense of Isabel as a character in her own right or of the intensity of their relationship.

However, the satire is bitingly sharp throughout and there are many moments of genuine horror. Many of the most powerful moments actually come from small details and casual asides – what begins as a mortifying anecdote about an eve prescribed too many weight-control laxatives who continues to run on the gym’s treadmill even as she soils herself is suddenly rendered bleakly horrific when it transpires the girl was six years old. O’Neill is also excellent when it comes to highlighting the inherent racism of modern beauty standards, and the intense, crippling insecurity that grips Freida every day is evoked with painful clarity.

Despite the exaggerated setting, there is much in Only Ever Yours which rings true even today – the use of social media to bully and scrutinise, the constant sharing and critiquing of images and the endless obsessing over youth and fertility and the insistence on categorising women as wives, whores or spinsters are all too familiar. The ‘Inheritants’ – boys from the social elite who are allowed to choose themselves an eve as their companion – are a boorish bunch with an arrogant sense of entitlement, privileged young men with attitudes that are all too familiar. It's the uncanny plausibility of the world Louise O'Neill has created that it makes it so chilling.

The intensity of Freida's suppressed emotions, her powerlessness and the relentlessness pressures of her peculiarly artificial environment, make Only Ever Yours a tense and somewhat exhausting read, but one I'd highly recommend, particularly for any teenager who - like the girls in the book - thinks 'feminist' is a dirty word.
Email Post
Labels: dystopia eves feminism freida louise o'neill marriage only ever yours teen fiction teenage women young adult