The Mystery of Mercy Close by Marian Keyes

The cover of Marian Keyes' The Mystery of Mercy Close depicts a chick-lit style illustration of a woman wearing a floaty pink skirt. I've no idea why this is, because the protagonist of this book is private detective who dresses almost entirely in black with occasional flashes of orange and actively despises pink. I mention this only because publishers who think women need to see shoes, cupcakes, a handwritingy font and a pastel colour palette on the cover of a book before they'll buy it are on my 'Shovel List'. A 'Shovel List', by the way, is a concept coined by the heroine of The Mystery of Mercy Close, and is a mental list of all the people you'd like to be hit in the face with a shovel. Anyway - here I've included the cover of another edition I found online, which I think is far more indicative of the type of book this really is. 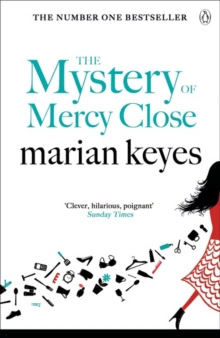 Marian Keyes is a prolific and phenomenally successful author, and someone I've always found interesting, funny and immensely likeable. I follow her on Twitter, I've read and seen countless interviews with her and I've found her to be perceptive and articulate on all manner of issues. Despite this, while I've read plenty of her non-fiction, I've never read any of her novels. I'm now wondering if the aforementioned cover art has subconsciously put me off, but that's by the by: I've now read The Mystery of Mercy Close and thoroughly enjoyed it.

I've mentioned before that I like Nick Hornby, Helen Fielding and John O'Farrell and if I had to categorise this book I would put it in a similar category - very funny, intelligent and astutely perceptive on all manner of serious issues. At the start of the book, private investigator Helen Walsh has fallen into financial difficulties during the recession and is forced to abandon her Dublin flat and move back in with her parents while she undertakes a job for her shady ex-boyfriend, Jay Parker.

Parker is the manager of an Irish boy-band, Laddz, who are about to embark on a high-profile reunion tour which could make him an awful lot of money. But one of the band, Wayne (the wacky one - as Helen points out, "in all generic boy bands, you have five types. The Talented One. The Cute One. The Gay One. The Wacky One. And the Other One") has disappeared, and it's up to Helen to find him. The investigation then expands to involve a large cast of characters, all of whom seem to leap fully-formed from the page no matter how small a part they play in the story, thanks to Keyes' ability to build a full picture of a person with just a few perfectly chosen details.

What really made this book stand out for me is, however, is one particular thing about the main character: she is severely depressed. She's not simply sad because she's lost her flat. She's not sad because she's worried about her boyfriend's infuriatingly close relationship with his ex-wife. She is clinically and severely depressed - suicidal, in fact, and this isn't glossed over.

Marian Keyes has been very open in the past about her own experience of depression and I think it will help some people to know this when they read the book - particularly if they don't feel that Helen would be capable of functioning as effectively as she does while going through a depressive episode. Helen's depression isn't, perhaps, quite what some readers might expect of someone in that mental state, but I personally found it to ring very true. "I've heard people say that having depression is like being hounded by a big black dog," says Helen. "Or like being encased in glass. It was different for me. I felt more like I'd been poisoned. Like my brain was squirting out dirty brown toxins, polluting everything - my vision and my taste buds and most of all my thoughts."

Marian Keyes is particularly good at capturing the sheer absurdity of depression, from the constant sense of impending doom to the incessant pressure to take up yoga. It's a myth that people with depression are constantly serious, and Helen is more than capable of being flippant and wry about her illness, as many of us are. I don't think, in fact, that I've ever read an account of depression that matched so closely with my own experience - and yet at no point did I find it uncomfortable to read.

I don't think there are many writers who would be capable of writing a book about someone suicidally depressed in a way that's laugh-out-loud funny but never insensitive or crass, but Marian Keyes manages to do so with remarkable warmth, honesty and charm. I loved this book, and I'll definitely be reading more of her fiction.